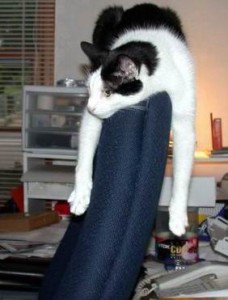 I got Clancy in 1990. It was right about the time I divorced my first wife, and he was around a year old. He loved to be with me as I sat at my computer, writing. If it was too warm to be in my lap, he’d park himself on the back of my chair, and stay there for hours. Even though the top of my chair wasn’t really very wide, neither was he, and he was quite comfortable and content. In fact he didn’t even rely on my shoulders to steady himself — I could get up, and he stayed there, with no struggle to balance, as you can see here.

I named him Clancy since he was a tom, and I was an author, and I had just signed a deal to write a big True Crime book. I didn’t want to write like Tom Clancy, but I did think it would be nice to earn the type of royalties he got! (That book fell through — thankfully! True Crime doesn’t really interest me enough to make a career out of it.)

So Clancy and I thought about what sort of writing did interest me, and a few years later This is True was born. He was there, and it was only fitting that he appear with me in True’s first book, in the author’s photo. He made several more appearances over the years. 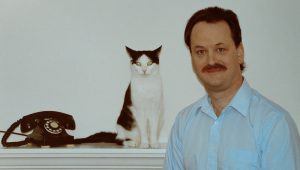 This is Clancy (and my “Dial M for Murder” antique telephone) in a mid-90s publicity shot that was never used. Clancy was such a cool cat! What cat sits through a lengthy photo session?! (There are a bunch of photos with him posing with me.) Studio strobes are not only bright, but make noise, and he sat there like a supermodel, striking several different poses with me. (Actually, he was more inventive with his poses than I was!)

We moved many times over the years, and while he hated riding in the car he always managed to adapt to the new place, even when I moved from hot L.A. to snowy Colorado.

Clancy was a sweet boy who loved to be held or to just be near me. In the summer he slept right next to me; in the winter, he slept on me. When I rolled over he’d “surf the wave” to stay in the same relative spot, and when I settled down he would too. But in recent months it was getting clear he was in distress. He has always loved to jump up into my arms (I’m tall, and the floor is a long way away, so I had taught him to jump up to me rather than rely on me to bend down to pick him up). But over time, his jumps were less and less powerful — he wasn’t making it all the way to my arms. And in recent weeks, he wouldn’t even make the attempt; he was simply tired and, apparently, hurting. 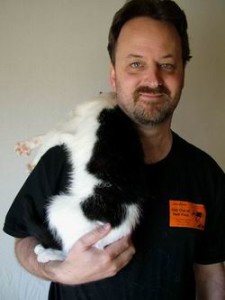 When he got into my arms, though, he was the most comfortable cat in the world, right up to the end. He loved relaxing on my shoulder; I obliged by gripping his little butt to support him there. He’d relax totally, trusting me to hold him in his favorite position. The photo to the right was taken the day before he died, and it’s classic Clancy — his pink toes splayed in pleasured comfort, purring away. 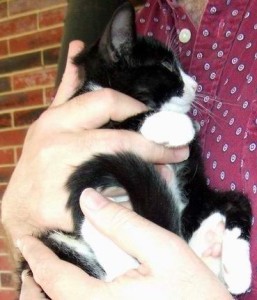 Almost exactly five years after Clancy died, I captured a feral cat that had been born wild near my office. “Agent 99” (or just “9” for short) is female, and is also a tuxedo. She loves sleeping next to me, though she doesn’t jump up into my arms — but see below! She has so many of the same personality traits that I sometimes start to call her Clancy. 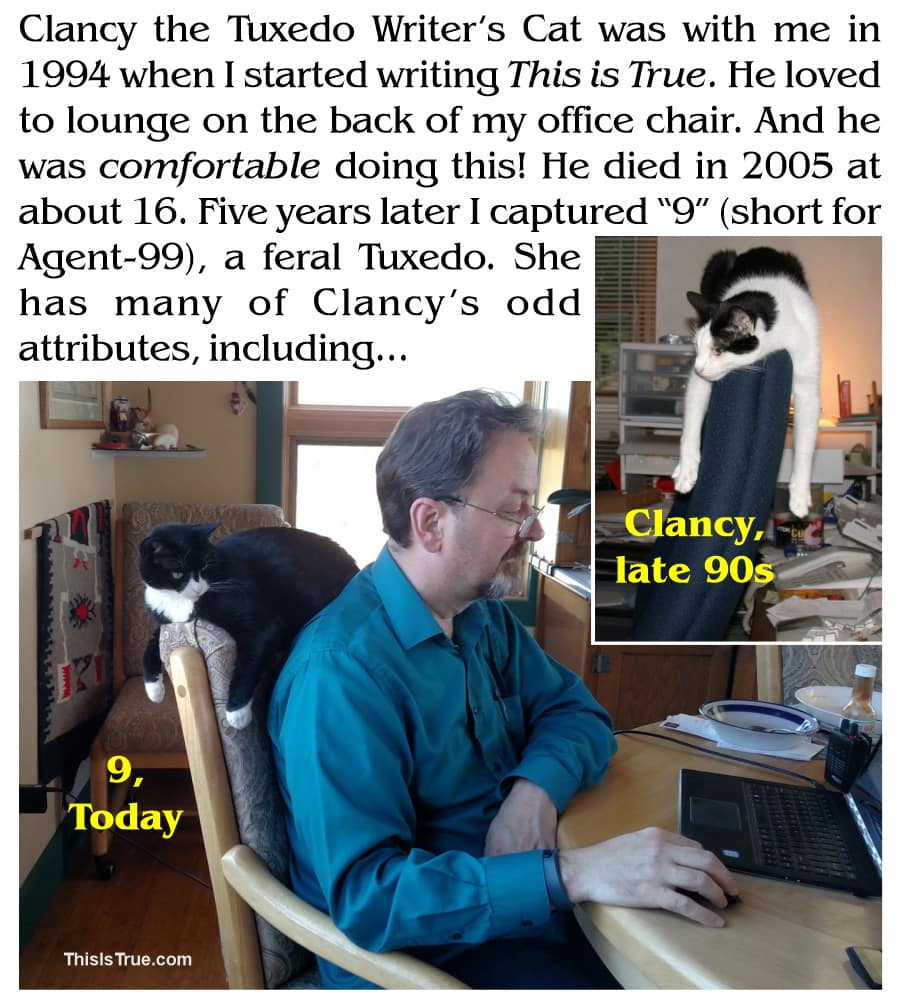